THE BRIGO KING AND THE ALMORADÍ FOUNDATION

D.José Montesinos Pérez Martínez (1745-1828), wrote between 1,791 and 1,816 the “Compendio Histórico Oriolano”, famous manuscript that after many vicissitudes is today in the Central Rural box of Orihuela. In it is included the “Summarized Chronicle of the Illustrious University Regia de Almoradí”, in which there is talk of the origins and history of the town.

Although it should be mentioned that Montesinos’ work has proved to be a mixture of history, legend and myth (although not less beautiful), we can not establish its level of truthfulness given its characteristics.

According to this manuscript, Almoradí was founded in the year 1,896 BC by the legendary King Brigo, and received the name of Amarión. It belonged to the province of Contestania, constituting part of a town of primitive Spain (probably of Iberian origin) that was settled in the territory of the present province of Alicante.

Later it seems that it was dominated by Greeks and Carthaginians, although it was the Romans who left unmistakable traces of their passage through Amarión. Later it happened to belong to the visigodos (when these they expelled to the Romans), depending like this, Almoradí, of Teodomiro.

In 713 AD, Teodomiro was defeated by the Muslim troops of Abd al-Azis in a struggle that lasted twenty months. Notwithstanding his defeat, the duke obtained a favorable treatment by virtue of which the whole southern region of the province was formed by a small Christian state called Tudmir, with a certain vassalage towards the emirs, while practically the whole peninsula was under dominion Muslim. This autonomy was preserved until the beginning of the 9th century when Abderraman imposed Muslim rule.

This dominion extended until the year 1,226, in which Jaime I the Conqueror dominated Almoradí and expelled to the moriscos happening our town to have complete dependence of Orihuela. The legend says that the night before the great battle that faced Jaime I the Conqueror with the Moors that dominated the area and that took place on November 30, were seen on the mosque huge golden spades, symbol of the martyrdom of San Andrew. Hearing of this in Rey D. Jaime and remembering the festival of that day (San Andrés), ordered the assault of the walls and reconquered Almoradí.

Years later, Alfonso X the Wise, son-in-law of Jaime I, granted the farm of Daya and the place of Almoradí, to the Castilian gentleman Fernando Perez de Guzmán. Thirty-two years later, Jaime II of Aragon recovered Almoradí by having committed the one of Guzmán an unfair act, being thus Almoradí added to the Real Corona.

In the year 1,583, Felipe II grants to Almoradí the privilege of University. Thus was denominated in Catalonia and later by the Crown of Aragon to the municipalities during Average Age, and thus left our town to depend on Orihuela.

When ending the War of Succession with the triumph of Felipe V, the fueros of the Kingdom of Valencia were abolished and the writing of documents in Valencian was prohibited. In the Parish File there is evidence of the change of the dialect by the Castilian language. Likewise, the King granted Almoradi the title of “Illustrious Villa” for his loyalty to the Crown.

But this is only one of the versions on the origin and foundation of Almoradí, since Gonzalo Vidal Tur, in his book “A Spanish Bishopric in Orihuela-Aliante”, silences Rey Brigo and the successive occupants of our town and grants the protagonism of The foundation to the Almoravides, the western tribe of Morocco that subjugated almost half of Spain from 1,130 to 1,273.

“It was then a strong fortress with towers,
Walls and large moats. The Almoravids,
When they arrived in Murcia they ran
Some to the mouth
Of the Segura River, marveling
Of the goodness and beauty of
Lands. To enjoy them and to exploit them, they created a fortress
And to remind his founders,
Called Almoradí “

In spite of its old date of foundation, Almoradi is a young town and in which they are scarcely observed remnants of the past, since a strong earthquake happened in the spring of 1829, concretely the 21 of March, completely destroyed it. Very few vestiges have survived to this day. Among them is the magnificent parish organ. So we can conclude that Almoradí is an old town which, over the years, has only rejuvenated, but has not forgotten its past and its traditions and customs, as old as its history.

As Escolano says the name of the town evokes its past because Almoradí is an Arabic word that means “My Will and my Desire”. 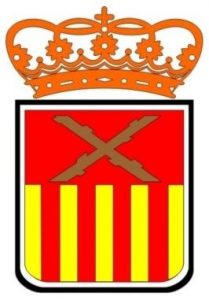 The present heraldic coat of Almoradí, that begins to be used officially in the Program of Fair and Celebrations of 1.71, is not adopted definitively until 1.976, once received the opinion of the Real Academy of the History, that approves that the shield of Almoradí is :

“Cut, 1st, of gules, the cross of San Andres, of gold, four sticks, of gules.

When the Municipal Corporation, incorporating it to the program of Fair and Festivals of 1.971, discloses the new shield, and the Privative Court of Water of the Water of Alfeitamí had been using its essential components in the seal with which it stamped its records and documents.

The author or authors of this valid antecedent of the municipal heraldic shield would undoubtedly know a famous manuscript written between 1791 and 1816 by Don Jose Montesinos Perez Martinez de Orumbella, under the title “Compendio Histórico Oriolano”, which is currently preserved in the Caja Rural Central Orihuela.

In this monumental work, Montesinos includes his “Summarized Chronicle of the Illustrious Regia University of Almoradí”, which begins with a somewhat rudimentary drawing of the coat of arms of “the famous Regia University of Almoradí (which is neither a village nor a place …) , With the cross of San Andrés and the sticks of Jaime el Conquistador, and it is, without a doubt, and with some difference, that has inspired the current municipal coat of arms.

Montesinos himself informs us that Almoradí was “possessed of Carthaginians, Africans, Romans, Visigoths, Goths and Moors whose Barbarian Ottomans possessed her pitifully, with very principal mosque in worship of her prophet Muhammad 542 years, that is, since 714 Until the one of 1,263, that the invictísimo King of Aragon don Jaime I the Conqueror, rescued it day 30 of November, own of the Apostle San Andrés, having been seen miraculously on the mosque before the conquest by all the Christian army on a golden spire , A symbol of the martyrdom of Saint Andrew, for which reason the undefeated monarch, who purged the site of the Mohammedan uncleanness, should dedicate himself and consecrate himself with all solemnity in honor of this Holy Apostle, as was done in the following year of 1264 ”

The heraldic organization approved for our town is not an unusual accident; Although we consider that in the manuscript of Montesinos the history, the legend and the myth are mixed.