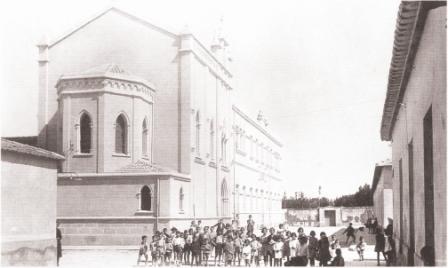 The building was designed in 1929 to be used as a modern hospital, and as such was built, distributing the upper floor in two pavilions, one for men with six rooms and the other with seven, for women. Next to this last pavilion also was conditioned the stay for five Carmelite nuns with a small dining room.

On the ground floor there was a large room with a capacity for eight beds, a small medicine cabinet and laboratory, offices and an operating room. In addition, just behind, a large patio with a well served as a laundry room, and away from the rest of the building, a small room intended for infectious lodge.

At least on two occasions the project was rejected by the Provincial Health Commission, since it violated in many points the regulations that were then required for a building of these characteristics, and had many defects: 13 beds were projected, when the minimum required For the population of that time (7000 inhabitants) was 25. There was a lack of local capacity per patient, since at least they needed from 37 to 40 m3, whereas the project presented on average 32 m3 per patient. Some rooms had indirect ventilation, and this was another difficult problem.

The end result is that the Hospital did not have the expected success, and the nuns hardly attended to a sporadic patient, so they took advantage of the room below to teach the girls.

In 1931 the subsidy was finally suspended for the Discalced Carmelite Sisters and the contract with them was rescinded, so that they finally left the building and moved to Cervantes Street, where they would continue until the end of the war to teach.

The hospital was actually only used as such in the last months of the war, when it was authorized to treat injured, denominated blood hospital.

A huge red cross was painted on the roof.

It was also used to house some refugees during the war, and at the end of the war, as a temporary prison.

On January 7, 1961, the municipal library was inaugurated in a hall on the first floor, which in 1984 was moved to a place in Pablo Picasso, which soon became smaller. Once again, in 1992, a new place was installed here, this time larger (175 m) and on the second floor.