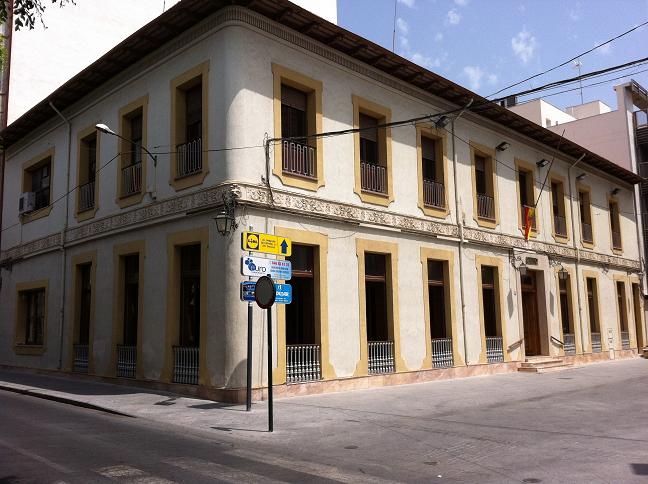 Twenty-five years before the Theater was inaugurated, the Casino Society already existed in our town. Specifically was created this cultural center on June 2, 1882, being number one of the founding members don Francisco Griñó Izquierdo, and its first President Don Julio Peduayé. By then it was located at No. 16 in the same street (where until a few years ago was the post office).

This company was prospering in such a way that in 1887 the premises were already insufficient, reason why in the Board of that year it was decided “to study the acquisition of a new building for the Society since the current one is small to accommodate such amount Of partners. ” Finally the 6 of July of 1900, being President Don Manuel González Sempere, was acquired the place that occupies now, being in charge of the works the engineer gift Ramón Martínez Domínguez.

However, it was an expensive project that had to finance the partners themselves with obligations, so it was extended for many years.

The following announcement was published in “The Grader” on November 10, 1908:

“… Almoradí, a people with a very strong sense of democracy, will inaugurate the new casino within a few days, and this act will be attended by the Deputy in The Trinitario Ruiz district. The act will be majestic, attending many people from neighboring towns.”

The inauguration took place on Christmas 1908, curiously, just a couple of months after the opening of the Theater.

In the following decades it was an important center of meetings where the first dances and carnival parties, soul and anteroom of any festive act, any homage, gathering or presentation were organized:

“… There, between sips of aromatic coffee and spirals of smoke Of the nice cigarette arise the magnificent companies and powerful societies, that unite the men in compact blocks to be able to face to the multiple needs of the life” (Magazine of Fair of 1930).

At the end of the 1950s, with President Manuel Canales García, it was decided to undertake an important expansion project, which consisted in raising the second floor, completely reforming it, creating a first television room and a new room for concerts and conferences. Finally finished in 1962.